So it’s been a while since I’ve posted for two reasons:

The first reason is that I’ve been busy and am bad at keeping up with things (see: it’s been nearly 7 months since my wedding and I am still working on Thank You cards. Sorry, everyone who attended my wedding and/or gave us gifts. We really do appreciate them!).

The second reason is that it seems like I pretty much just have more of the same thing to say. We ate out a few times, tried to make good choices and probably failed, but damnit, we’re thinking about it.

Sadly, I never got to make the cornbread I mentioned in my last post because we ended up getting a massive snowstorm and didn’t get to celebrate my sister’s birthday with her. That also meant that we didn’t get our promised cheesecake for our monthly treat. We waited a few days and hemmed and hawed over what we should have as our treat. Should we bake a cake, or cookies or something? But then we can only eat it one day, what do we do with the rest of it? We finally decided, since we were running out of time and didn’t want to lose our dessert (we decided we needed to do it within the first week of the new month), to go to Whole Foods bakery section. We each picked out a piece of cake, which turned out to be nice and we didn’t have to have the same thing. Also, their pieces of cake are enormous. For some reason, I had been craving carrot cake for a while, which is unusual since I never find myself craving that. It’s delicious, but it seems to get lost in the cake choices. So I picked out a piece of delicious-looking carrot cake with cream cheese frosting, and Dan picked out a piece of chocolate cake with chocolate mousse and raspberry filling (a lot like our wedding cake that neither of us got to try!).

That cake was so good, I swear. I tried Dan’s but mine really hit the spot. By the time we each were halfway through the cake, we both didn’t think we could finish, but of course we did. It was delicious. And then we both thought we might be sick. I even left most of my frosting because it was just way too much.

Neither of us were sick, but we still didn’t feel so hot. And the funny thing was that after that, although I had stopped craving dessert after every dinner a few weeks before, I really wanted sweet again for days! Addictive, indeed. I find that when faced with desserts or sweets now, I’m pretty easily able to turn them down without too much grief, and I even wondered before our January treat if I even really wanted it. It might be easier to avoid it all together. But it is nice to say that we’ve been good.

People keep approaching me and telling me that they’ve been following my blog, which always surprises me and is super nice! Thanks, y’all! And lots of people send relevant news articles and recipes my way, too, which has been really neat.

After my last attempt at baking bread, I have tried again, and I adapted the previous “mix and dump” recipe to something I think is a little more like a normal recipe, but still very easy. After mixing all my ingredients together, I let them rest for ten minutes, then I knead the dough with the bread hook for a few minutes until it’s smooth. Then I divide and let rise in the pans. It turned out a lot better than my first attempt. Less dense, though still not exactly the kind of fluffy we’ve come to expect from bread these days. I was questioning recently how people used to make bread, since they didn’t have easy access to sugar, and I know that the sugar helps the yeast to rise. I was reminded that our current bread is a lot different than what bread used to be. Fascinating. Chemistry. Science.

I did, however, manage to make some delicious muffins! It was my first attempt at something that normally has sugar in it, and they turned out well! I slightly adapted this recipe for carrot applesauce muffins by just subbing out the half cup of honey for half a banana. I also added a cup of frozen blueberries, which was an awesome idea, go me. I think I’ll try it a few different ways, too, with maybe walnuts or chopped dates added in. It’s a good muffin base, and I was worried that the banana flavor would be too strong, but with just half a banana I couldn’t really taste it. These weren’t as sticky and cakey as many muffins are, which I liked. I could see how they would benefit from the honey, but it wasn’t necessary. They were a super awesome treat last weekend. I think I could also pretty easily make banana nut muffins, and I might try that soon, too.

This one is actually from a second batch I made yesterday. Same recipe though.

We’ve been getting adventurous, less out of craving for sweet and more just to satisfy curiosity. Like I said, people keep sending us recipes, so we’ve tried a few different “ice creams” now. The first was suggested as a “classic vegan” substitute by a friend. We blended up two bananas, some walnuts, four dates, some cocoa powder, vanilla, and almond milk and it made chocolate banana ice cream! It was pretty amazing, even if Dan did mistake the red food coloring for vanilla and added that in, too. (The man does not read labels. He used breakfast sausage in a shepherd’s pie recently. No major disasters so far, but just funny.) 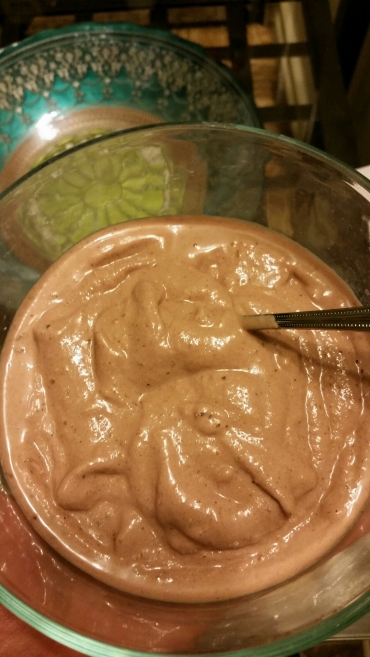 It looks gross but I promise it was good. The red food dye doesn’t help.

I found a recipe for mango ice cream on Pinterest, too, in which the only ingredients were frozen mangoes and heavy whipping cream blended together in the food processor. Unfortunately, I decided that since it was super easy, I wasn’t going to consult the recipe and would just add in cream until it looked creamy (hey, it seemed reasonable). It turned out to be barely mango flavored, since I had added too much cream, and so we added some frozen banana, too, which overpowered the mango. We were a bit sad. It was pretty good, but not what we wanted. We’ll try it again another time, probably. I also am lactose intolerant, and I was scared that it would make me sick. It fortunately did not, but my stomach did growl loudly in protest. 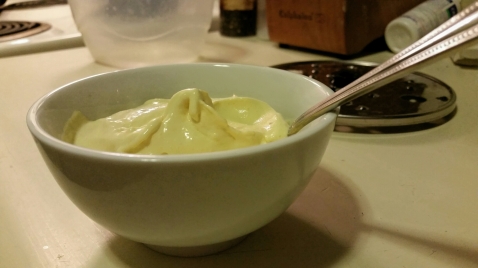 This one was actually less delicious than it looks!

Also, I have been missing orange juice for a while now. So one morning I was thinking of how they would make us juice at our resort in Costa Rica (Tambor Tropical, and I highly recommend them), and how with the continental breakfast, juice was included. But you would ask for an orange juice, and they would cut up some oranges and blend them with ice right there for you! It was amazing, and it fits within our parameters. So I did just that, I cut off the orange peel from some oranges and threw them in the blender with some ice and voila! We had juice! It was wonderful.

People have started asking me if I feel any different, and the answer is “not really,” though when I stop to think about it, I guess I have noticed a few things. Remember how I said that I am normally hungry about 80% of the time? That’s dropped way down. I feel like a normal person now regarding how often I’m hungry, for the most part. So that has been nice, and is unexpected. I guess I also feel like my energy is more consistent throughout the day. I find that I don’t have the energy dips or crashes like I used to. So I guess, yeah, I do feel a bit better. Am I losing any weight? Well, I don’t really know, since we don’t have a working scale. If I had to guess, maybe a few pounds, but nothing particularly noticeable. I think my cheeks are slightly less chubby, and I feel like my love handles are slimming a little. But that could just be because I want to see that, so I do.

I think that’s all for now, folks!